What We Know About Ageing

03 Jan What We Know About Ageing

Posted at 10:19h in Blog, News by Pernille Tranberg 0 Comments

Both genetic and environmental factors contribute to longevity and the age we die at. It is often said that a third of the variation in our lifespan can be attributed to our genes. That another third is determined by our environment, the conditions we live in: rich or poor, smoker or non-smoker, sporting ace or couch potato, and so on. And that he final third is put down to chance.

From the book ‘Growing Older without Feeling Old’ by professor Rudi Westendorp. Edited by Pernille Tranberg. 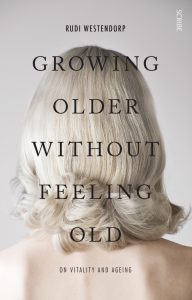 We have a chronological age, a biological age, and a social age. Chronological age is indicated by the celebration of our birthday each year. Our biological age indicates whether we develop well or poorly, or age fast or slowly. Some years are worth celebration, marking particular milestones in life. This is what is called our social age. For example, we attain the status of legal majority on our 18th birthday, along with the right to vote and to marry without our parents’ consent, or it is our 67th birthday that entitles us to receive pension.

Different Trajectories
Exceptions notwithstanding, the human body is ready for sex and reproduction by the age of 18, but the developmental level of many people’s minds by that age is far from adult. The biological development of the brain is still ongoing, and will not even begin to reach completion until we turn 30. For many, the rights and obligations of legal majority come far too soon, but for others they are attained much too late. And there is even greater variation between people when we look at the deterioration of their physical and mental state — that is, the ageing process — in later life. Chronological- and biological age do not always follow the same pace. Some people look 80 when they are only 50; they are well past their prime. But the opposite can also be true — people in their eighties who look middle aged.

What We Died of Before
Not too long ago, infections were one cause of early death. The same with the climate; it was too hot or too cold, too dry or too wet, or a combination of those things. And with inadequate nutrition. For example, it took a long time realising that seamen need to eat citrus fruit on long voyages to stop them from developing scurvy. But also many different kinds of violence were common causes of death in the past.
In the past more then in the present, there are the ‘costs of sex’. Death in childbirth and disease as a direct consequence of having sex. Most sexually transmitted diseases can now be cured. Sex in old age has an emotional value, and is important in relationships. But nowadays is unlikely that sex makes you either live longer or die sooner.

What We Die of Nowadays
Many people believe that we die of ‘new diseases’ today, but most such diseases are not new at all. They were not recognised or defined as such in the past, for the simple reason that only few people reached the age at which they appear. Now we almost all arrive at old age, there has been an explosion in the number of patients with cardiovascular disease, caused by atherosclerosis, the thickening and blocking of the blood vessels — sometimes called ‘hardening of the arteries’. Age is the most significant risk factor here – not increasing affluence.
From a biological perspective it only goes down, but from a social perspective our standing is far from over. Key is to feel young when growing old.

Facts That Everyone Should Know
According to various studies and research mentioned in the book, today we know the following about ageing:

Getting children. The ultimate explanation for why we age is that we invest in fertility at the expense of our own body. Beside this evolutionary explanation, there are countless types of damage that cause a reduction in the functioning of cells, tissues, and organs that makes us frail, ill and ultimately leads to death.

A healthy lifestyle. We know that we should not smoke and should not eat or drink to excess. And do sufficient exercise to keep the pace of aging low.
Keep a low-calorie diet. A study showed that monkeys who had eaten calorie-restricted food over a long period of time look younger in appearance, have more energy, and are less likely to develop the diseases that are typical of ageing, such as diabetes than monkeys who had eaten a lot of calories.

Slow growth. There is a positive correlation between a late onset of puberty, body height, and bone strength. A lengthy period of development gives a better result, biologically speaking. However, all comes with a cost: tall people have an increased risk of developing cancer.

Good public governance. When a government loses control of a country, life expectancy falls. For example, when the Soviet Union broke up in the early nineties, excessive drinking, violence, and suicide meant that average age of death among men in Russia fell from 65 to 58 in a very short time. There is a positive link between a well-functioning public administration and the quality of life. This suggests that the welfare state, based on the rule of law, and access to services and social provisions, significant contributes to the length of people’s lives and our satisfaction with that life.

Invest in family and friends. Research has shown that social contacts are crucial for our wellbeing. It is clear that old people put social relations first, whereas younger people may attach more importance to other things, such as social standing, sex, or money. Actually, older people with a small network of social contacts have a higher risk of mortality than smokers, even though smoking is one of the biggest risk factors for illness and early death. A healthy lifestyle thus include investing in family, friends, and social contacts so as not to have to cope alone in old age. Social participation, even if it is unpaid, plays a large part in providing a sense of purpose to life, and in maintaining social contacts.

Be optimistic and vital. It also seems that having an optimistic attitude to life keeps you physically healthier. Vitality is also an attribute that is important for achieving happiness in old age. Vitality is the ability to develop to full capacity, to get the most out of life. Our will to make something of oneself depends on motivation and introspection: what do I want, and where am I heading? It requires a positive attitude, and the energy to invest in that outlook. It provides us resilience to cope with setbacks.

With the CHALLENGE platform, we hope to add several new facts to the list of What We Know About Ageing.